He has many names and, because of his endless evil, Hollywood has given him many faces.  This is a look at my favorite portrayals of the old serpent.

While I am a born again Christian, I must say that seeing how the devil is played on screen is one of my favorite things to see.  While one of the portrayals on this list is strictly picked for his makeup and wardrobe, the rest are my favorites because of their personality traits and dialogue.

Are you ready for a hell of a ride?  Right this way to catch the highway to hell!  (Puns obviously intended) 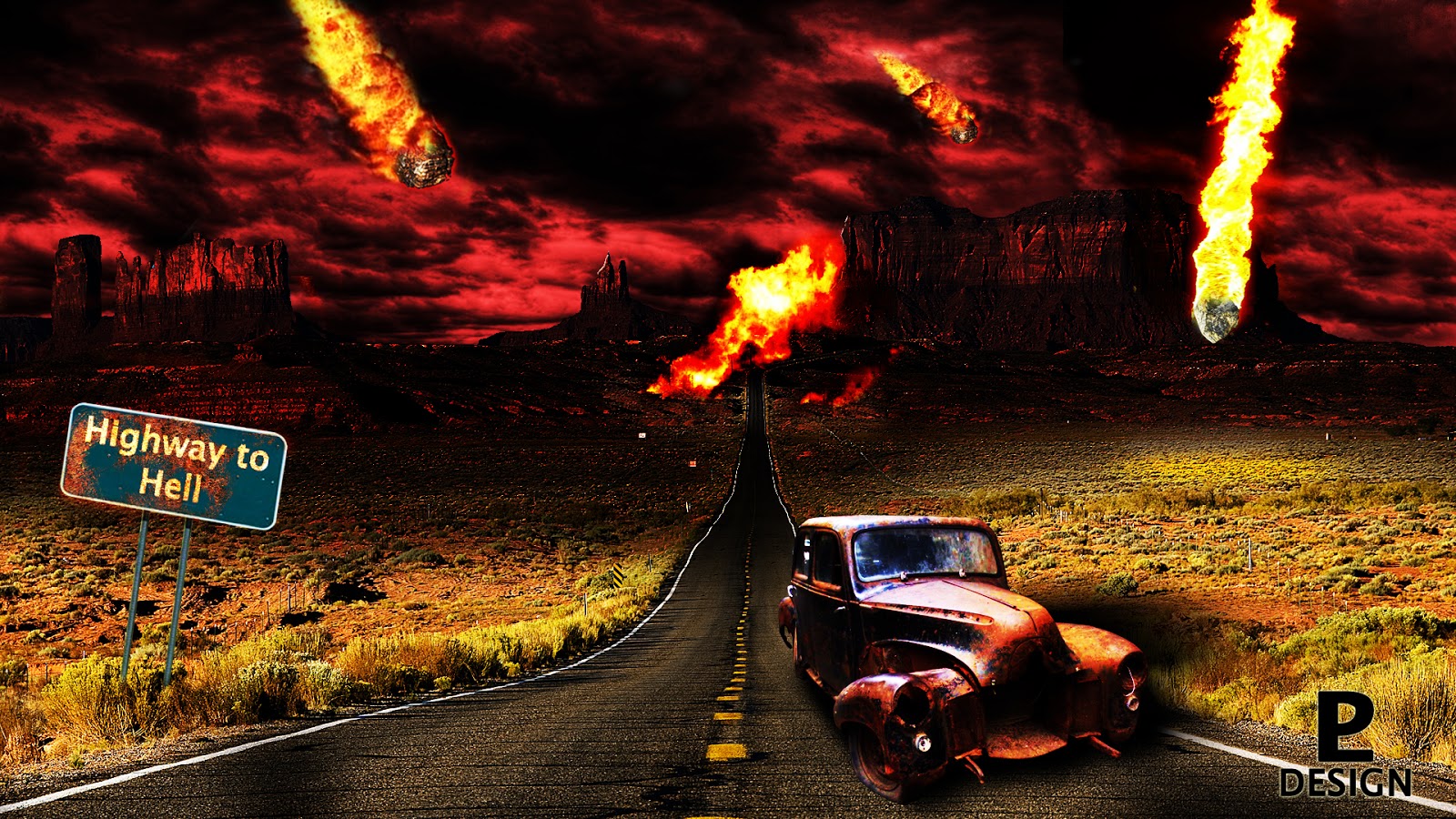 There are a few very popular portrayals of the accuser of the brethren whom I did not particularly like for one reason or another while the vast majority of film fans found them to be great.

Jack Nicholson, "The Witches of Eastwick"

I wasn't really a fan of this movie that I saw many years ago.  I was also very young when I saw it so I had no idea Nicholson was the devil...I just thought he was a warlock.  I'm sure he was great in this but I never gave this movie another chance.  Perhaps I'll try watching it again soon with a new understanding. 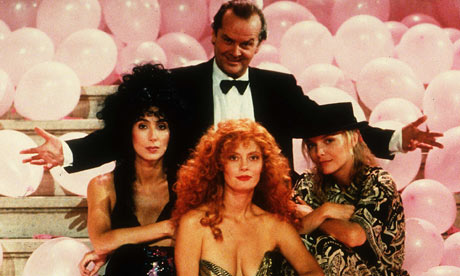 The movie looks funny and, from what I hear, Elizabeth Hurley does a fine job.  However, I'm a fan of the more serious portrayals. 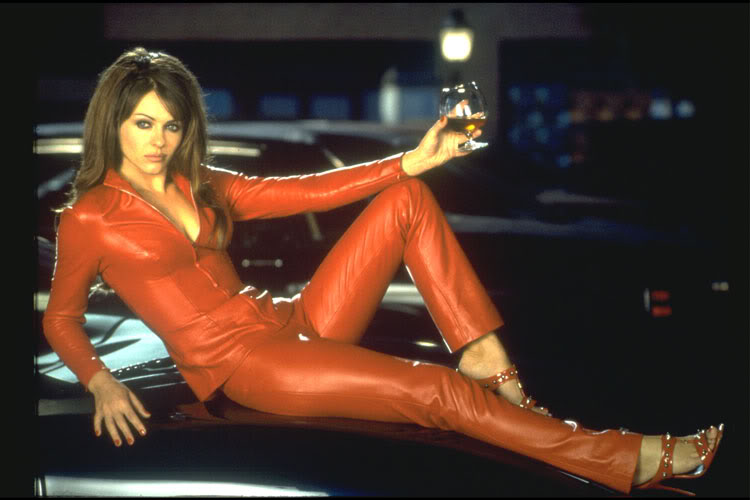 It's an honorable mention and not official because this isn't a portrayal in a movie, but in a TV show.

I mentioned him in my villains post earlier, but he was so awesome and underused in Supernatural that I had to mention him again.  His way of twisting the truth just enough to make it sound like he was a good guy was flawless and believable.  His demeanor gave you the impression that he could be your best friend or worst enemy.  A truly awesome and chilling performance over the span of multiple episodes of Supernatural.

Click here to read a short interview with him on his time as Lucifer and how he prepared for it.  It's a great look into what some actors may do in preparing for the role of the bane of humanity.

They say the devil is in the details.....so let's get into the details of what the top portrayals of the angel of light were...

At number seven, we have the great Tim Curry playing Darkness in the movie Legend!  Along with Pennywise the Clown from Stephen King's IT, Tim Curry has given me nightmares for the longest time.  When I saw this movie as a child, the character 'Darkness' scared the life out of me!  Even now looking back at this movie, the makeup and wardrobe was so amazing!  Tim Curry really looked like what we envision the devil to be; horns, hoofs, huge, muscular, fangs, claws, eyes like a snake, voice like a monster and a cocky attitude...he was only missing a pitchfork to complete the ensemble!  Keep in mind that he may not actually be playing the role of satan because at one point he begs his 'father' to save him, but the look of his character screams lord of darkness!

How can you go wrong with De Niro and a very young Mickey Rourke (the dude looks and sounds nothing like he did in this movie anymore!)?  Louis Cyphre (De Niro) is trying to locate someone for reasons unknown.  Manipulation is the devil's strongest suit here.  Looking very slick and sharp, De Niro delivers a wonderful performance and the movie offers a really great twist in the end!

In a few days I'll be publishing a post called "Hey, It's That Guy!" about actors we've seen in a mess of movies, loved the actors, yet still have no idea who they are.  Peter Stormare is very close to the top of that list.  I absolutely loved his portrayal of the devil in Constantine.  While it was a very short appearance (maybe a total of about 7 minutes out of the whole movie), it was a memorable one where Stormare stole the scene and possibly the movie.  Dressed in white with blood dripping from his feet, slow motion type movements and speech that sounded like Parseltongue (where my Harry Potter fans at? WHAT WHAT!!), Peter Stormare made an excellent father of lies.

Leland Gaunt, aka the devil, sets up shop in Castle Rock, Maine.....literally.  The name of the shop is called Needful Things and Gaunt uses the items he sells to cause destruction and chaos in the town.  Excellent movie and awesome performance by Sydow.  Seeing the devil as an old (and seemingly harmless) crone and gradually become more threatening with personal information about people was chilling.  I loved this portrayal because it wasn't the devil as a supernatural being but as a man swinging deals exchanging material things for favors (or souls, symbolically)....oh yea, you get to see his supernatural side at the end.

The devil is a lawyer.  There's a classic lawyer joke in there somewhere....
It's blatantly obvious that something supernatural is at work throughout the film, and it becomes more obvious before the "big reveal" at the end that Pacino is the enemy of our souls.  Al Pacino plays an arrogant know it all who is trying to corrupt mankind as much as possible to separate man from God.  What makes this portrayal awesome to me is the speech he gives at the end of the film about God, himself and humanity.  It's thrilling and captivating and makes you think.  Definitely one of my favorite movie speeches of all time.


#2. Rosalinda Celentano, "The Passion of the Christ"

All I have to say is: WOW!  Almost 100% of the people who saw The Passion of the Christ for the first time had no idea that it was a woman who was playing the role of satan.  She played it so well.  You could see and feel the evil permeating from her; the seduction, the malice, the contempt, the mockery, the temptation....she stole every scene she was in, including the one with Jesus in the garden.  Great performance.

**and I must add that when the devil wardrobe and makeup comes off, Rosalinda is quite beautiful. 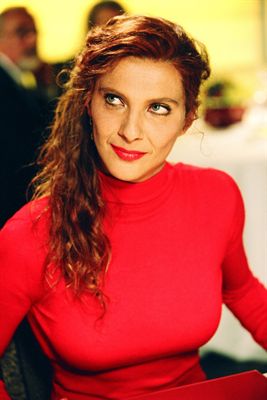 Wearing a trench coat, hair slicked back, perched atop a wall, eating a flower petal by petal and roaring at one of his demons that gets a little too loud....Viggo hit the nail on head here.  You knew this was all evil you were dealing with, and true to satanic form, what he proposes as a deal to help people turns out to be an attempt to bring them down in the end.  I personally have a soft spot for the Prophecy series because I love any story having to do with angels, demons, God and the devil, so I'll tell you that this movie is great.  Christopher Walken owned this movie until Viggo steps in for his 5 minutes and takes it all away from him with his performance.....well, the Bible DOES say he comes to steal!


So what do you guys think?  I haven't seen every movie out there, so there may be others with better portrayals....any suggestions?

For the record, I am a born again Bible believing God fearing Christian who knows that the name of Jesus is more powerful than any demon or devil.

Remember to keep those movies rolling!

An idle mind is the devil's playground!